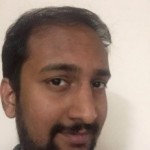 Rajamayyoor Sharma is the author of the Age of Azmoq series. While he wrote short stories (primarily for his own pleasure) during his college days, he never thought he would write a book until this story had taken root in his mind. He had had the idea for the series for years, but never found the time to pen it down. He finally decided to take some time off in 2017 and write the first book of the series: The Valantian Imperium.

During the day, he is a management consultant. He has a degree in engineering from BITS Pilani and an MBA from IIM Bangalore in India.  He currently lives in Bangalore with his wife, son and parents. He loves to spend his spare time reading anything with a story, watching movies with his wife and playing with his son.